I used churro bites that I bought at Trader Joe’s. You can get those or you can get churros and chop them into small pieces.

1.- Preheat the oven to 350°F and line a cupcake pan with paper liners.

3.- In a smaller bowl, mix together the eggs, vanilla, vegetable oil, buttermilk and sour cream. Pour the wet ingredients into the dry ingredients and whisk to combine. Fill each liner 2/3 full.

4.- Bake in oven for 16-18 minutes or until a toothpick inserted into the cupcake comes out with a few moist crumbs.

5.- Remove the cupcakes and transfer to a wire rack.

1.- Mix the sugar and cinnamon to a small bowl and stir to combine.

2.- Brush each cupcake top with warm butter (just a tiny bit) and then dip the top of the warm cupcakes into the cinnamon sugar mixture.

Core the centre of each cupcake using a pairing knife and then fill each cupcake with the dulce the leche. Cover the hole with the cake that you took off.

In the bowl of a stand mixer fitted with the paddle attachment, beat the butter on medium speed until light and fluffy (about 7 minutes).Turn the mixer to low, and gradually add half of the sugar one cup at a time. Once incorporated, add heavy cream and vanilla and beat until combined.Add the remaining powdered sugar one cup at a time and mix on low until combined. Add in cinnamon.Increase mixer speed to high and whip until light and fluffy, about 5-7 minutes. 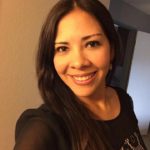 Thanks for visiting my blog. My name is Sandra. I created this website to share all my baking adventures with you!